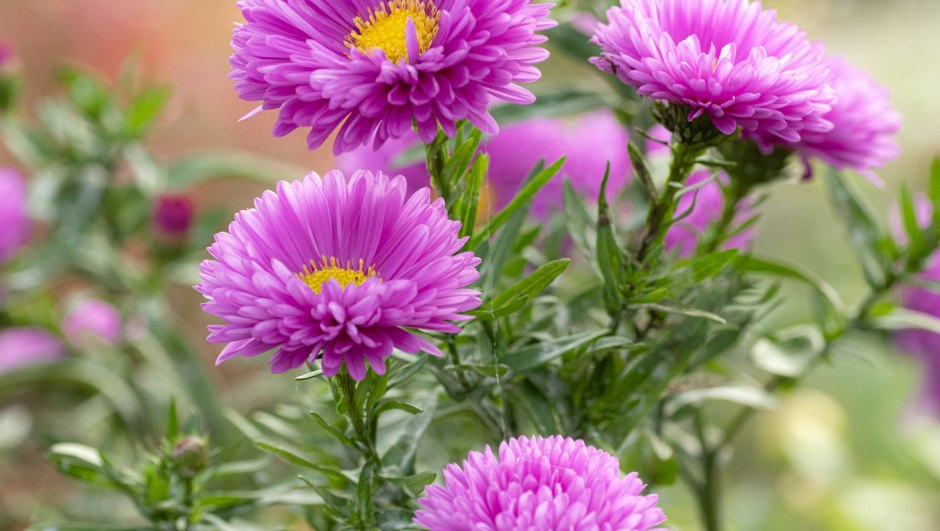 On Monday morning a mist was rolling down towards us from the fields behind us. The garden was still and silent, except for one little bird who was happily chirping away. It was raining – a steady, fine drizzle – the type of rain that you think isn’t too wet to work in, but soaks through everything in minutes.

Rain also has the effect of intensifying colours – it’s all to do with refraction, though I won’t pretend to understand anything about that. I went indoors to collect my camera and took a few shots of some wet foliage before reminding myself that the camera isn’t waterproof.

By afternoon the mists had cleared, the clouds parted and the sun came out. While we were at lunch a wind sprang up and the fence we’ve been trying to paint was dry enough for us to resume work. This week, gardening was put on hold while we did as much fence painting as possible before temperatures drop, bringing production to a halt. Apparently, fence paint shouldn’t be applied when temperatures are below 10C (50F). There’s a bit more about the fence and the rain shots below, but meantime here are the subjects of this week’s Six on Saturday.

This is one of those plants of-many-names; to give it its full title it is Symphyotrichum novi-belgii ‘Patricia Ballard’ – a Michaelmas daisy. I recently purchased two and love their strong colour and the thick layers of petals. In time the plants will grow to around 90cm (3ft) tall. They’re not without problems though.

I quote here from the site I bought the plants from: “A strong growing New York aster that rarely succumbs to mildew, but does produce a dazzling display of bright mauve-pink daisies”. Did you take note of the part that says it rarely succumbs to mildew? Within days of the plants arriving there was mildew on them, and also on two white varieties that I bought at the same time. I’ve been really good this year about not using fungicides, but this, unfortunately, calls for action.

These are not the loveliest crab apples, but the tree has such beautiful spring blossom that I don’t mind too much. I don’t use the apples and they’re left on the branches for the birds – they feed on them during the winter. The colour, although not as strong as some varieties of crab apples, is welcome in the garden at this time of year.

I don’t recall the leaves of this peony turning such pretty autumn colours in the past, perhaps this year is special or perhaps I just haven’t noticed. So, returning to the rain I mentioned earlier, there I was, on that still and almost silent Monday morning, water dripping off my hat, taking photographs of dying peony leaves.

They’re not as fabulous as maple leaves, but I think they’re beautiful and looking at them will remind me of that misty October morning in the garden. Just me, the soft rain and the little bird.

I photographed this at the same time as the Peony above. I knew if a strong wind blew up that the leaves could be gone, and I’d be annoyed at not taking a few extra minutes to gather some shots.

F. ‘Alice Hoffman’ is a small upright hardy fuchsia which grows to 60cm in height. It’s currently still in its nursery pot, though I’ll pot it on to a more permanent container within the next week or so. Although it’s hardy, I’m new to the world of fuchsias and I’m not sure how well it will cope if we get a harsh winter. The plan is to eventually grow it in a border but I’ll keep it in a pot meantime so that I can take it into the greenhouse if the weather is too severe.

I mentioned a few weeks ago that we had the fence replaced between us and our neighbour, and that I was unhappy about it. I didn’t like the way it had been constructed on our side. It is clumsy and ugly.

We have since covered the offending area (which is just outside the greenhouse), with trellis, and painted the whole fence and the trellis black. Husband definitely wasn’t/isn’t convinced about the new colour.

The climbers that were on the old fence have been spread around on makeshift supports for weeks and have been trod on, tripped over, and had paint dripped on them. Two have had to be dug up, but replacements arrived yesterday. Rosa ‘The Pilgrim’ will be the main climber. Yellow on black – what do you think? Once the trellis has flowers in bloom, I think that will be the final piece of fence camouflage.

I’m pleased with my new little seating area outside my greenhouse – that was another piece of camouflage – intended to take the eye away from the boxed-in base. The chair is small enough to be lifted into the greenhouse if I’m working in there on windy or wet days.

The black background intensifies colour, I think I’d even go so far as to say it adds a little bit of drama to the planting. I know that opinion is divided on whether to have black in the garden or not. I love it, but I’m happy to hear your views, favourable or otherwise. 😁

That is all from me for this weekend. I’m hoping to spend the remainder of the day planting while my husband starts painting the old fence at the back of the garden. Black. 😉 Have an enjoyable weekend, I hope the weather will be kind to you. Take care and stay safe.

About Six On Saturday

To join with other garden enthusiasts from around the world, and see how they garden, just take six photographs and post them to Twitter and/or your blog each Saturday. You can get all the details from The Propagator who kindly set it all up.

All photographs copyright of Catherine Wood unless otherwise stated