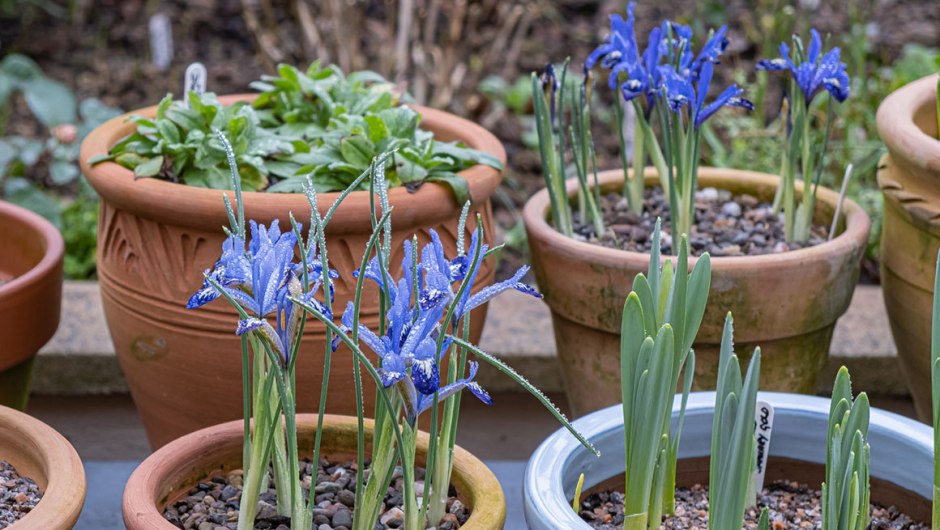 One week today we’ll have reached the end of January, and there’s a lot of new shoots appearing throughout the garden now, some on time, some early. The two pots of Iris reticulata (above) have flowered a bit earlier than I’d hoped, but they’re pretty and I enjoy looking at them from the study window on dark and gloomy wintery days.

I have to admit that I was a bit surprised to see the rhubarb this week. I knew it was pushing up through the soil (it hasn’t been forced), though over the past few days it seems to have shot up. But who’s complaining – rhubarb crumble anyone?

Although there won’t be any flowers appearing on this Aquilegia for some time yet, the little leaves are so pretty that it looks good at this time of the year without them. I’m not sure what variety it is, as two plants grow side by side in this area, and only one is showing. I’ll know soon enough.

The Pelargonium cuttings were taken in July, and there’s a few more that were taken in October. They’re still in the small pots that they were originally planted into and probably won’t be potted on until the end of winter. The greenhouse isn’t heated, and everything in there has to be covered in fleece on nights when temperatures are particularly low. So far though, they’re doing ok.

The daffodils on my desk are my £1 therapy for this time of year. When it’s so dreich (one of our favourite Scottish words to describe a wet, dull, gloomy, dismal, dreary day!) the perfect pick-me-up is a bunch of supermarket daffodils. At just £1 a bunch you can’t get better value than that can you…

I don’t even bother putting them in a vase – jam jars supplied by a well-known make of French jam are the perfect size for my cheery bunches of daffodils. Plus, when I need a few more jars more, it’s the perfect excuse to have another home-baked scone. 😊

The Agave spends spring, summer and autumn on the doorstep at the front of the house and seems to thrive there. I take it into the greenhouse for the winter, where it remains, mostly neglected, under the staging until May. All it seems to need is the very occasional drink of water.

There’s a little baby plant on the other side of the image and it will be, at some point, detached and potted on. This Agave has produced a fair number of plantlets that have all been passed to friends, but this little one I’ll keep, and when it’s a bit bigger it can sit beside its mum in the sunshine (I’m always hopeful we’ll get lots of sunshine!) at the front door.

Thanks to The Propagator for hosting Six on Saturday on Twitter.

All photographs copyright of Catherine Wood unless otherwise stated.