Autumn has arrived, and I’m still wondering whatever happened to summer. The days are shorter and I’m opening the greenhouse later in the morning, and closing it earlier in the evening. By next weekend I expect that all my Cosmos and other bedding will have been removed and I’ll be complaining about empty borders.

This week I’ve had two days out! Pre-Covid-19, a day in a park and a visit to see a long-time friend would have been ordinary, every-day events, but after a long lockdown, I am cherishing those two days and hopefully I’ll never again take simple pleasures like these for granted.

This week my youngest grandson turned 2 years old. There are no parties this year, instead, we went to a country park with mum, dad, the two children and their maternal grandmother plus an uncle. The children had a brilliant time in the spacious adventure playground set within a beautiful area and our biggest enjoyment was watching them having so much fun.

Yesterday I visited a long-time friend, we haven’t seen each other in six months, so had a lot of catching up to do. We walked around her garden first and although she complained about the nibbles in a number of plants, they looked fantastic compared to mine, some of which have been munched to ground level! Her garden is beautifully tended, and it’s easy to see the thought and care that she puts into it.

Next week I’m going to my first post-lockdown garden centre (yeah!), but meantime, here’s my Six for this Saturday.

This dahlia featured in last week’s Six, when just one flower had opened. I said how much I loved it, and as a show of appreciation, it presented me with seven flowers just two days later. I love it even more. It’s had all sorts of awful weather to contend with this week, but it’s held its heads high and those gorgeous slender stems have, remarkably, stayed upright. Long live D. ‘Chat Noir’.

The top image was taken just outside the summerhouse, the one below was taken from inside, overlooking part of the garden.

The only dahlia unaccounted for this year (other than D. ‘My Love’ that didn’t grow) is ‘Babylon Bronze’ and sadly this isn’t it. I’m sure when I dig up the tuber I’ll come across the label clearly written ‘Babylon Bronze’ along with the date it was planted and the name of the supplier. However, this is what has flowered, and it’s not the dahlia that I ordered earlier in the year, it’s not D. ‘Babylon Bronze’. The closest I can find to it online is D. ‘Pippi’. 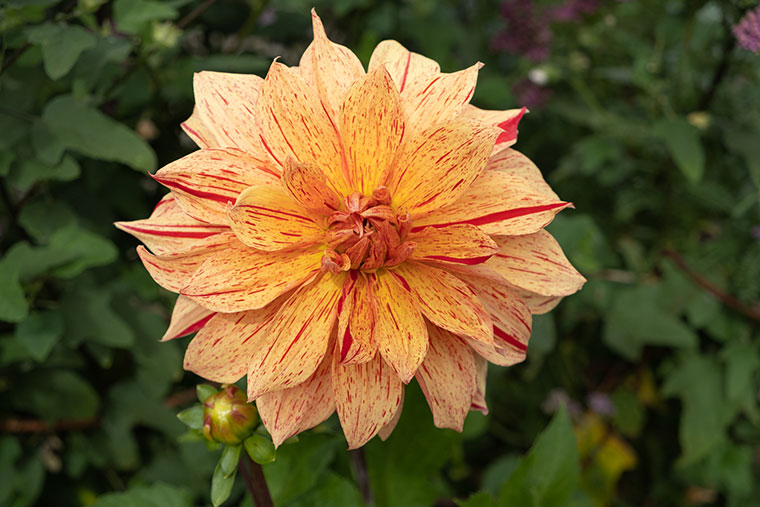 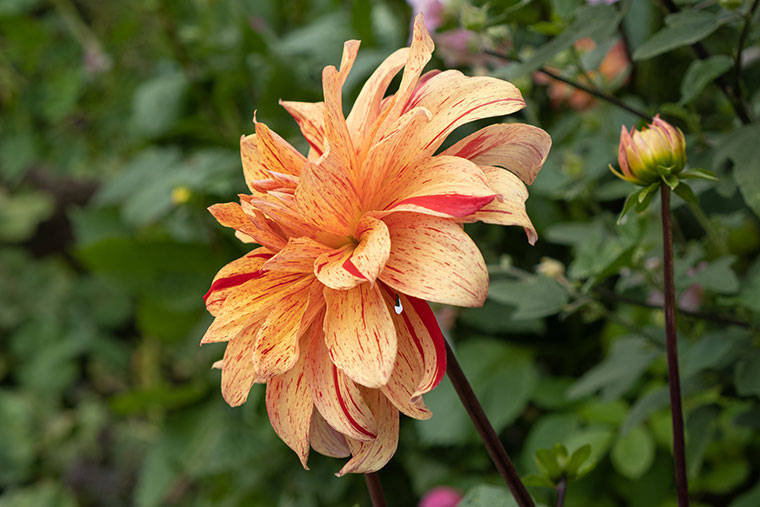 I’ve been growing Ammi for a good number of years and planting it amongst the roses. I like it there, but it’s so late in flowering this year that the roses, who flowered their little hearts out during the summer are now past their beautiful best. The Ammi germinated well and grew into strong little plants during spring, but then their growth slowed down.

I have bought a packet of seeds and will sow them shortly and do my best to try to get them through the winter so that they will have a head start next year. Good plan, if I can make it work.

This clematis is clambering up a short metal obelisk, through a small tree, and I suspect, over the fence and into a neighbour’s garden. They’re probably seeing more of it than I am. Tidying up this particular area is a project that’s been scheduled for late winter. I have way too many projects… Meantime the clematis (who’s name I don’t know) is adding some much appreciated early autumn colour. 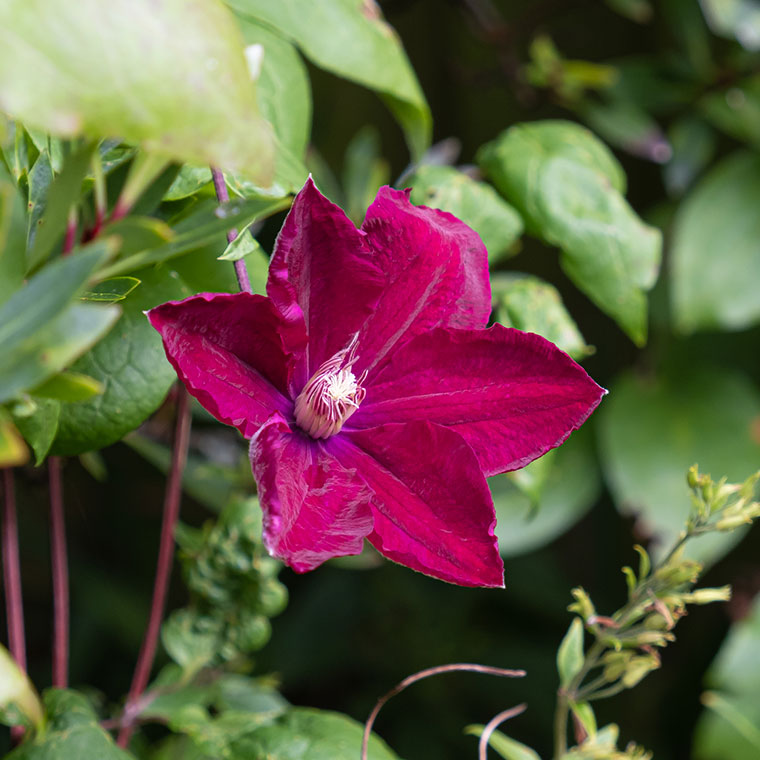 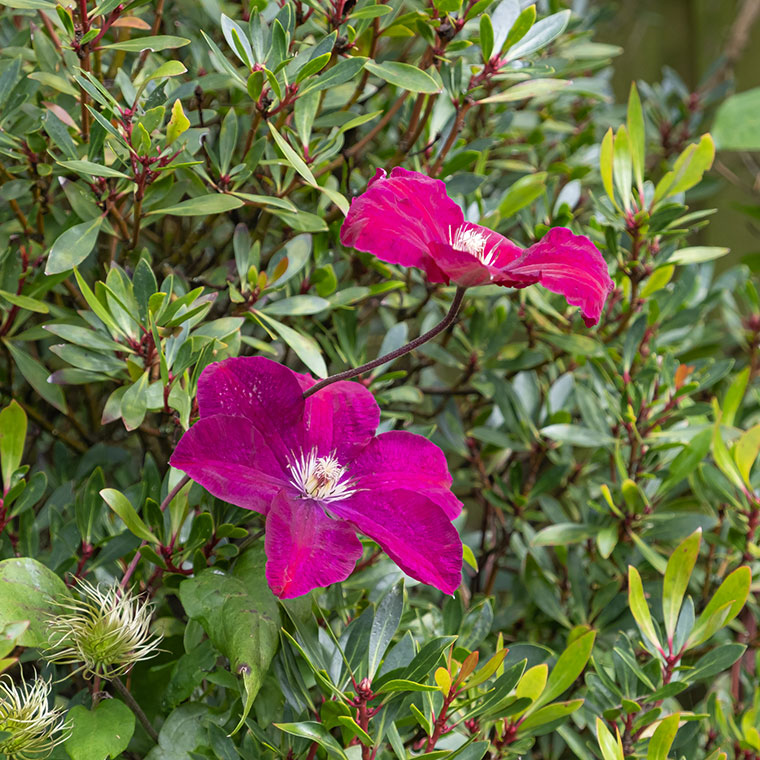 This tall and graceful anemone has been in bloom for several weeks and still has plenty of flower power left in her. It’s her third year in this border, and so far she hasn’t outgrown her space. It was nice to see Adam Frost planting two ‘Honorine Jobert’ on Gardeners’ World last night.

This is a small Patio Dahlia, one of three that I bought from a local garden centre. It has a pretty little flower, and its yellow colour is striking against the dark leaves. It has flowered fairly well so far, but mostly just one (sometimes two, but on opposite sides of the plant!) flowers at a time. I’m waiting for a spectacular performance of massed buds opening at the same time. 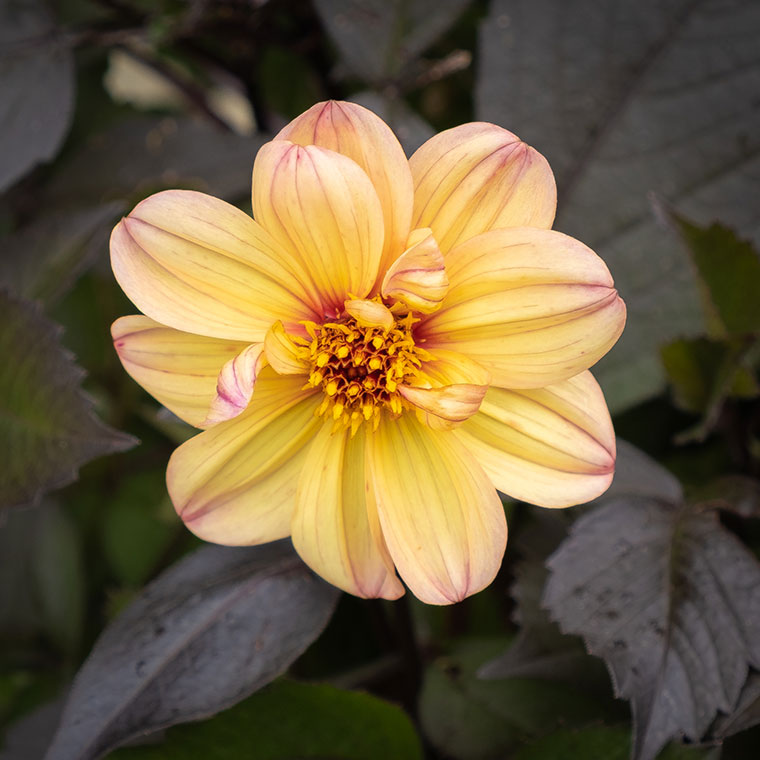 That’s my six for this weekend, don’t forget to check out all the other Six on Saturday posts from all around the world. Details below. Happy gardening everyone!

ABOUT SIX ON SATURDAY

To join with other garden enthusiasts from around the world, just take six photographs and post them to Twitter and/or your blog each Saturday. You can get all the details from The Propagator who kindly set it all up.

All photographs copyright of Catherine Wood unless otherwise stated.